The aim of the study is to identify the possible causes for failure of the forged component during fatigue test.

Failure investigation of the failed front axle beam was carried out through (1) visual inspection (2) residual stress analysis (3) NDT analysis to locate cracks/defects followed by sample preparation for investigation (4)  reconfirmation of alloy composition (5) optical and SEM studies to reveal the microstructural features and inclusion characteristic (6) analysis of fracture surface to understand crack initiation and propagation phenomena and (7) hardness and tensile testing for comparison of the mechanical properties with the required specifications for this grade of steel.  Based on the experiments and the results obtained thereof, it was concluded that the front axle beam was broken due of fatigue failure. It seems that the segregated sulphide/oxide inclusion, both at the surface and subsurface regions, detach at the inclusion/matrix interface during grinding forming microcracks. The failure seems to be due to hand grinding of flash and presence of inclusions at the surface and sub-surface regions, particularly breaking of high aspect ratio MnS inclusions present in the sub-surface regions. Subsequent crack growth takes place under the cyclic loading conditions. Crack propagation in the matrix was enhanced due to the localized segregation of complex oxy-sulphide inclusions.

A detailed analysis of the failed front axle beam assists to evaluate the health of the failed component as well as points towards modifications in some of the process steps to improve the product quality. Cracked surface revealed the presence of many beach marks signifying interrupted fatigues test. Fractographic features indicated that fatigue was the main cause of failure, where fatigue crack initiation point was on ground surface. Microcrack formation due to breaking of high aspect ratio MnS inclusions in the sub-surface regions during hand grinding acts as crack initiation point during fatigue loading. Subsequent crack growth is by due to the cyclic loading conditions. The evidences found were enough to clearly understand that crack propagation in the matrix was enhanced due to the localized segregation of complex oxy-sulphide inclusions in and around the crack location. 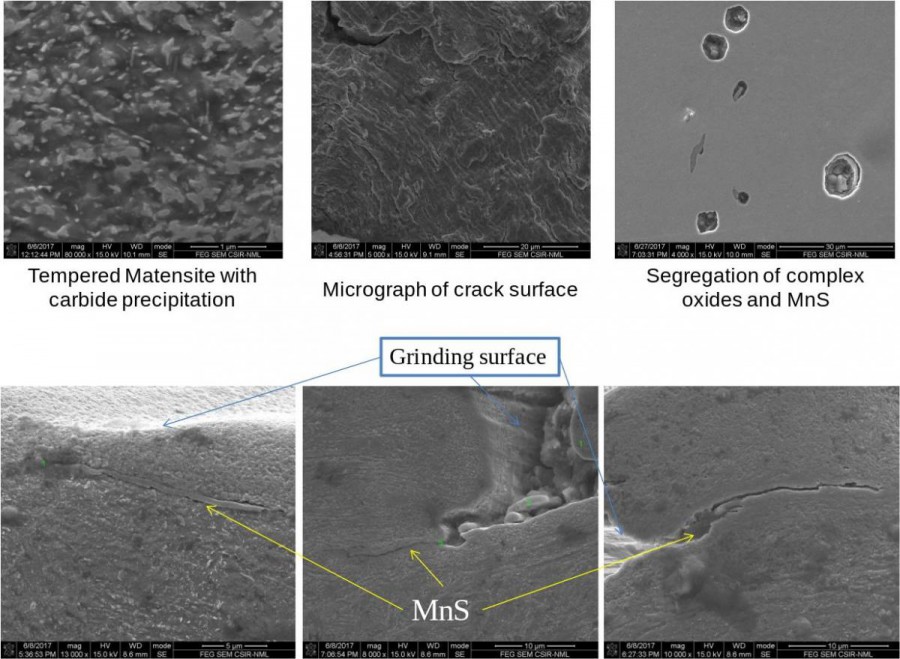 Micrographs revealing the summary of investigation